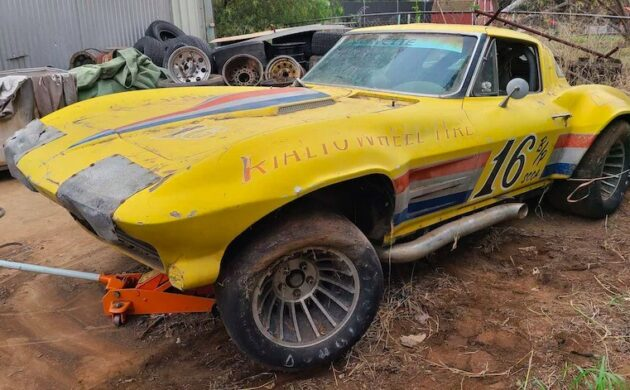 The 1963 Chevrolet Corvette is a classic sports car that was produced by Chevrolet in the early 1960s. It was the third generation of the Corvette, which was introduced in 1953 and became one of the most iconic American sports cars of all time. The 1963 model was notable for its distinctive split-window design, which was only used for one year before being replaced by a more conventional single-piece rear window.

In an era wherein it seems like unless you have a smart phone glued to your ear you’re likely to miss out on the next great barn find, this 1963 Chevrolet Corvette race car proves otherwise.

Spotted in the classifieds section of a small-town newspaper near Lake Havasu, this genuine split-window Corvette was rescued out of the California desert where it had been stored for 44 years after it last turned a wheel on the road course.

The Corvette was used almost every weekend at tracks throughout California, with the longtime owner calling the well-known Riverside circuit his home course. The Corvette was never a perennial champion but he did win some races and only retired it to move into a lighter-weight Camaro.

The tires even still held air! The Corvette’s period-correct track car interior with its upgraded bucket seats and SS steering wheel just reeks of 70s-era competition car greatness. The best part is the Corvette retains its original title and VIN so it can be put back on the road again.

It should always be a race car, in my opinion, and hopefully that sweet patina will never be washed away.