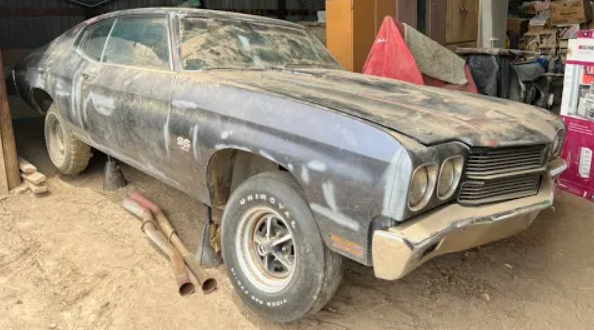 Discovering a classic car that’s been hidden for decades is pure gold for barn find enthusiasts, but things become even better when the vehicle in question is a rare gem.

Hidden from sight for more than four decades, this 1970 Chevrolet Chevelle is one of those cars.

What makes it special, you ask? Well, it’s not one of those mundane Chevelles that Chevrolet built by the hundreds of thousands in 1970. It’s not even an SS 396, which is plenty desirable thanks to its 330-horsepower V8. Nope, this coupe is the ultimate 1970 Chevelle, the SS 454 LS6.

Offered for only one model year, the bundle turned the already potent Chevelle into a massively powerful beast. And it was all down to the 454-cubic-inch (7.4-liter) big-block LS6 that delivered a whopping 450 horsepower and 500 pound-feet (678 Nm) of torque.

We’re talking about a mill that made more oomph than the mighty 426-cubic-inch (7.0-liter) HEMI, rated at 425 horses and 490 pound-feet (664 Nm) of twist. That’s an extra 25 horses and an additional 10 pound-feet of torque, enough to make the Chevelle LS6 the most powerful intermediate of 1970.

But as impressive as it was, the LS6 option was also quite expensive. So were insurance rates for high-performance muscle cars, so the LS6 engine found its way in only 4,475 vehicles. There are no records as to how many were Chevelle coupes, but most experts agree that Chevrolet sold around 3,300 of them. That’s less than one percent of total Chevelle production for 1970!

Amazingly enough, the Chevelle is still in solid condition, with no rust issues to run by. And while the original paint is no longer on the car, this Chevy still rocks its original, numbers-matching LS6 V8, automatic gearbox, and Posi rear end. The original carburetor is still under the hood as well!

Hidden for 43 years, the LS6 is about to get restored, so the owner called Chevelle expert Patrick Glenn Nichols for advice.