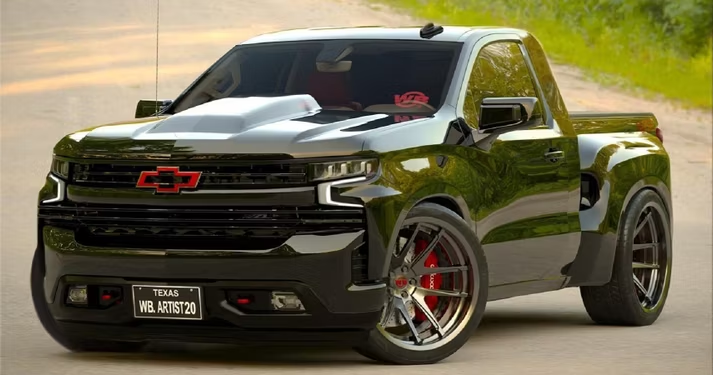 A term coined by Chevrolet a long time ago, stepside refers to a truck design in which the fender wells are located outside the truck’s bed. This is precisely what Oscar Vargas, the pixel artist known as wb.artist20, used as inspiration for the badass sport truck rendering before your eyes.

Originally envisioned as a single-cab stepside with Super Sport goodies, the rendering was taken in a more macho direction after Oscar realized something. “I remembered I had a 632 3D motor in my files, so I had to use it on this. I went a little crazy with all the angles, lol.”

876 pound-foot (1,187 Nm) of torque at 5,600 revolutions also need to be mentioned, along with the SuperMatic 4L75E-R four-speed transmission that Chevrolet developed specifically for this massive V8.

Imagined with a cowl induction hood, the SS-infused Silverado features bright orange exterior details that perfectly match the crate engine’s valve covers. A couple of orange-finished tow hooks are featured up front, where the grille is finished in black, blending in with the body color. Out back, you’ll notice a one-piece tonneau cover as well as a trailer hitch receiver.

Double-spoke alloys wrapped in Pirelli P-Zero rubber perfectly suit the high-performance truck, which also stops on a dime thanks to Wilwood brake calipers and drilled rotors. Unfortunately, for those of us who still remember the 454 SS, the Golden Bowtie isn’t interested in this type of truck.

GM currently focuses on bringing the Silverado EV to market while also disappointing ICE loyalists with the Silverado ZR2 and Silverado ZR2 Bison. Had those two been given a supercharged V8 powertrain, Chevrolet would have closed the gap to Ford’s Raptor and Ram’s TRX.