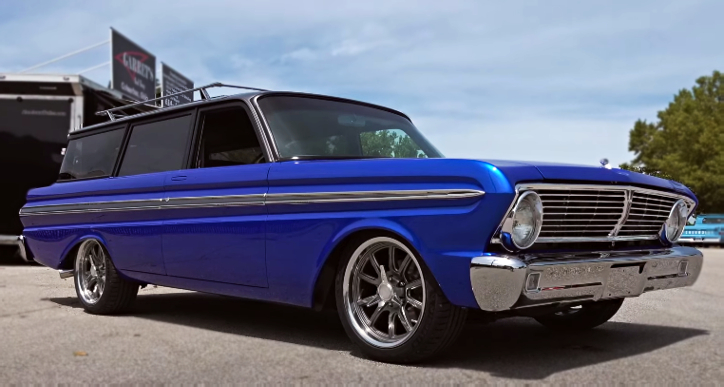 Owned by a true Ford guy, this 1965 Falcon Wagon was brought to the Garret’s Rod Shop for some enhancements. From the beautiful Blue paint to the full custom interior and neat engine bay, I like everything about it. I could probably go without the roof rack.

You don’t see many 1965 Ford Falcon Wagons, and I am glad the owner wanted to keep it on the road, rather than build a trailer queen. It has some very cool custom touches, and plenty of go coming from the well dressed Ford 302 Crate Engine.

This 1965 Ford Falcon Wagon isn’t wearing big shoes….17 Inchers all around…It wears them well. Under the hood is a Ford Performance 302 Crate Engine that has has a little dressing added to it..And few internal goodies to up the horsepower and all that has been cleanly installed. The brakes and suspension have been upgraded to handle the extra performance and is still fresh from the recent overhaul. This 1965 Ford Falcon 4-Door Wagon was built to drive and turn heads….I’m sure it will do both.