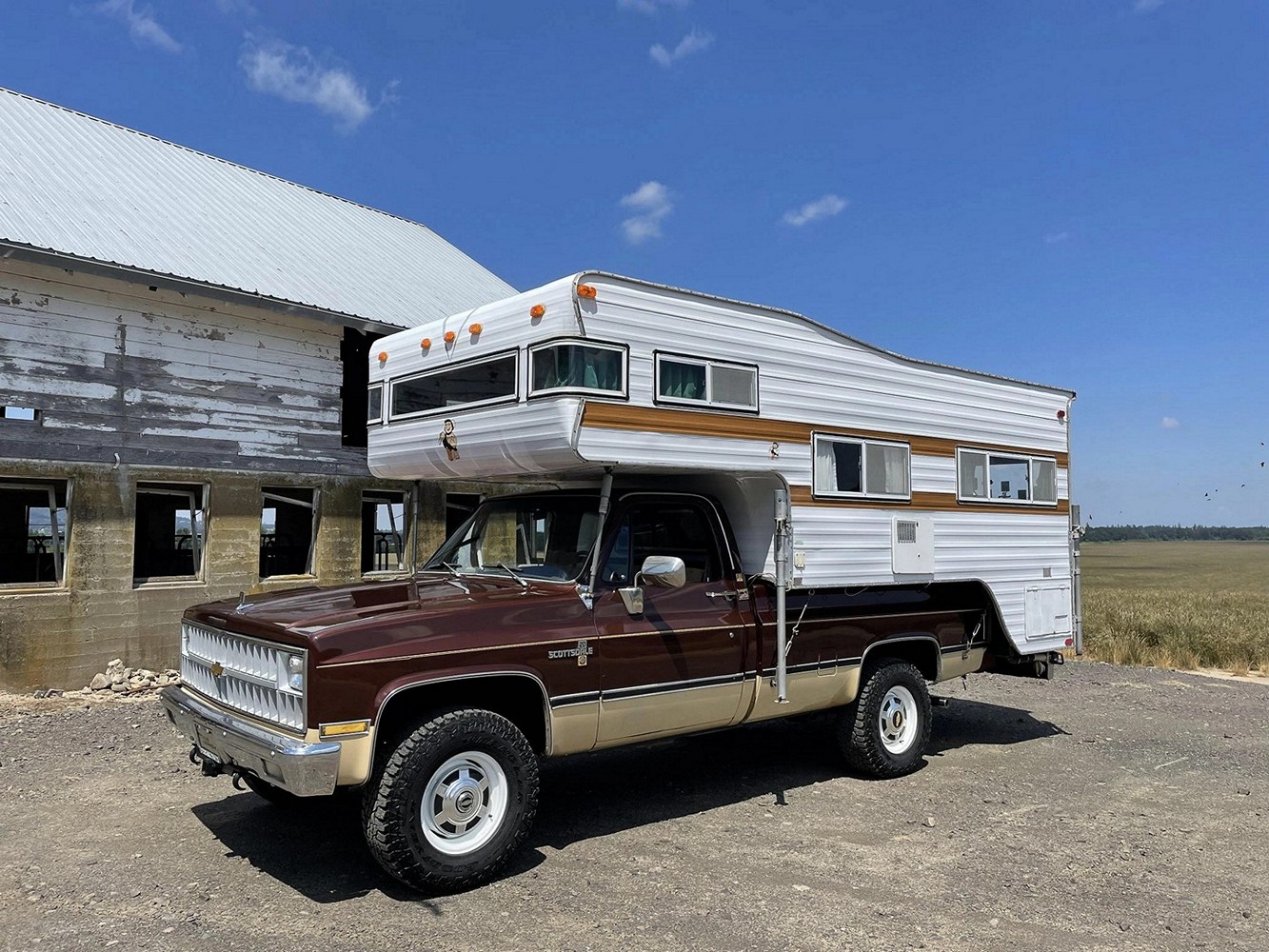 The term “home on wheels” perfectly describes this 1982 Chevrolet K20 Scottsdale Deluxe Camper Special, which has a 1973 Caveman camper mounted on the back.

Yes, the shell is older than the snail, but that’s just part of the mobile lifestyle.

The Chevrolet and GMC trucks from the third-generation family were a huge departure from what GM previously made. As their “square-body” nickname suggests, they had squared-off front and rear ends, connected by subtle bodywork which was now tested in the wind tunnel.

They came in two-wheel drive C10/C20/C30 versions or four-wheel drive like the K10/K20. “Silverado” was the top trim level rather (from 1975) than the model itself like it is now. This particular example is a Camper Special version of the 3/4-ton truck, which was a package that included upgraded suspension and wiring harness pre-installed for bed-mounted camper shells.

This particular 1982 Chevrolet K20 is finished in Mahogany Metallic over Almond paint, which looks to be original. It features the new grille design launched the prior model year, which integrated only two square headlights. 1981 was also the year they offered the 454 V8 on the K-series as a replacement for the 400 V8.

This replacement 454 unit would have been the largest available at 7.4 liters and it produced 230 horsepower and 360 lb-ft of torque, the ideal setup for a heavy load. It comes hooked up to a 3-speed automatic and dual-range transfer case. However, the truck actually came with a 6.2-liter diesel V8 from the factory.

The diesel V8 was actually a big deal, new for that model year. It also came with bespoke “6.2L” badges on the tailgate, which heralded the start beginning of the metric system in Detroit production. But you can’t deny the 454 sounds better, plus it produces about 100 hp more.

The truck is packed with retro touches that take you right back in time. It’s got white 16-inch steel wheels with dog-dish hubcaps, the interior features bench seats trimmed in tan and brown leather, and the dash includes surprises like a cassette player and CB radio.