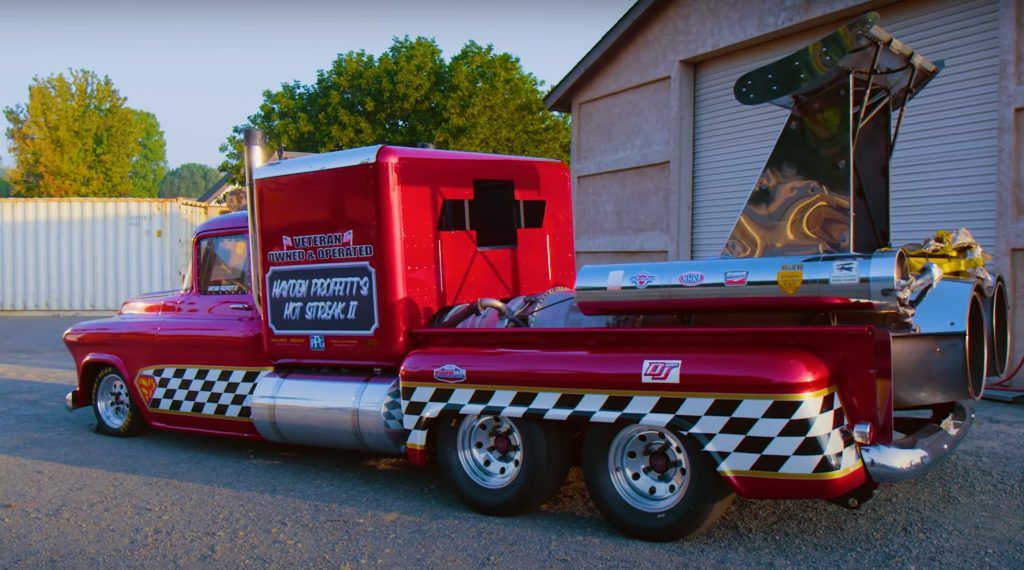 Doing 350 mph (563 kph) in a pickup truck may sound surreal, but it all makes sense when you consider that the 1957 Chevrolet Apache appearance of the machine is a mere illusion.

Behind the fiberglass cab wearing the Golden Bowtie emblem we find not one, but two jet engines, which make a combined 25,000 horsepower. And with the beast, which is nicknamed Hot Streak II, tipping the scales at 4,300 lbs/1,950 kg (hey, it’s lighter than a Hellcat), speeds like the one above only come naturally, despite the shoe box aerodynamics of the thing.

These days, the machine is operated by Hayden Proffitt II, who is now in his 30s. And for him high velocity is a family legacy. His grandfather, Hayden Proffitt, is currently enjoying his 90s after a legendary career as a drag racer.

Back in 2015, Profitt had just come back to civilian life after spending nine years servicing aircrafts for the U.S. Air Force. As such, the fact that this Chevy is animated by Westinghouse J34 jet engines, which have powered military aircraft starting in 1959, only seemed natural.

Parachutes? Sure, the vehicle has four of them—a pair in each of the two tubes, since the contact patch of the tires wrapped around the 15-inch wheels isn’t merely enough to deal with the kind of speeds the truck can develop. And if it’s numbers you’re looking for, Hayden explains that deploying the chutes at 300 mph (483 km/h) generates -10 G’s of force.

And since we mentioned aero above, we’ll add that there are two spoilers preventing this truck from reaching for its airplane siblings: one at the back and one above the cab.

So, whether you’re looking for a back massage, which those afterburners (these essentially throw raw fuel into the jet engine’s exhaust stream) deliver, a back massage (remember those chutes?) or a bit of Yoga—as demonstrated in the vid, access is not exactly facile—this 1957 Chevy truck is basically a 17-feet-long (5.2M) fiery spa.