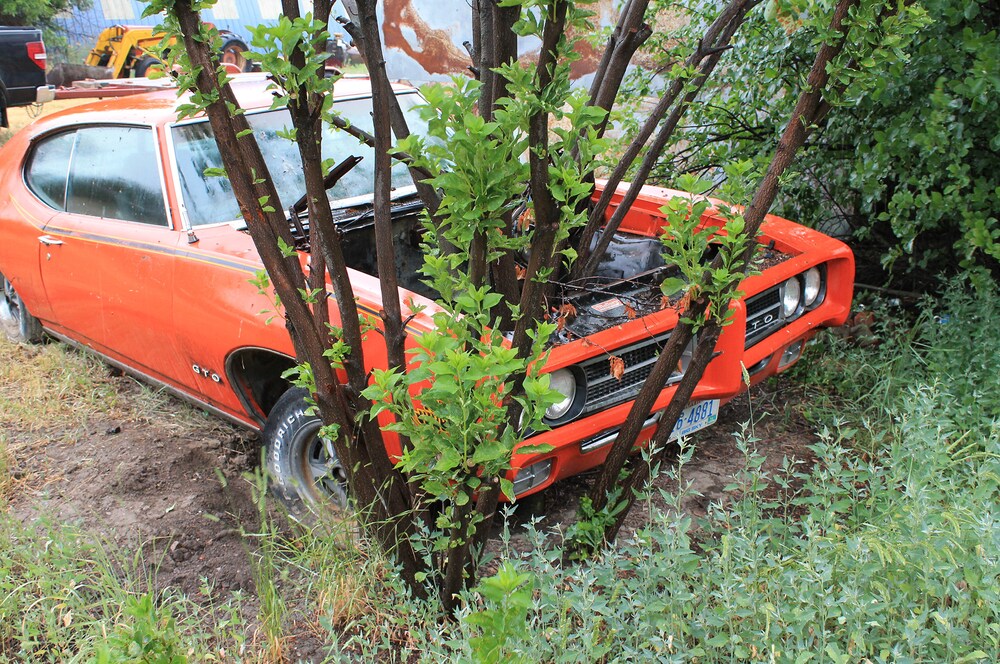 This beautiful ride definitely deserved her second chance of life and very happy to see her again in the streets, where she belongs.

One might think that years spent outside, exposed to the elements would cripple a classic muscle car. One might also think a tree sprouting up through its engine bay would signal that its chassis has permanently been reclaimed by nature.

But that is apparently not the case, at least for one 1969 Pontiac GTO, and a cherished first-year “Judge” model too.

Last year, Barnfinds member Alan F. was looking for a new project car, and had narrowed his options down to a 1968 Yenko Chevelle replica, admittedly to his own reluctance. But before he sealed the deal, he phoned up an old high school friend who had long owned a Pontiac GTO Judge. And that’s where this arboreal discovery comes into play.

The friend indeed did still own the GTO, just one problem—it had a tree sprouting through its engine bay. As our friends at Barnfinds explain, the owner bought the car in the late 1970s, one of its pushrods eventually broke, so the owner then removed the engine and transmission from the car, which awaited a repair that seemingly wouldn’t come.

But Alan wasn’t about to let this muscle car languish, even if he hadn’t seen it in person for 30 years. He ordered a history report to check the validity of its GTO Judge credentials—it’s genuine—and proceeded to buy the Pontiac from his old high school buddy. The car was coming to a new home… a distance of over 2,000 miles.

Amazingly, the elements appear to have been very kind to this Pontiac GTO. Despite its years outside, the tires still held air when pumped-up, and after the tree was chainsawed out of the engine bay, a tractor successfully removed the Pontiac from its wooded resting place.

More astonishing still, the floorpans and frame are both said to be in fine condition, and even the interior is in fair shape, apart from some errant mice. Alan writes that the only critical structural fix is to replace the trunk pan, which fell victim to the weather.

The drivetrain? That was recovered from a nearby barn, which includes the car’s original numbers-matching engine block, heads, carburetor, transmission, bell housing, hood, Ram-Air bits, among other components.

After a quick spritz at a local car wash, its beauty had already begun to shine through, and it will only continue to get better and better. The Judge is getting returned to the road, and we can’t wait to see how it turns out.