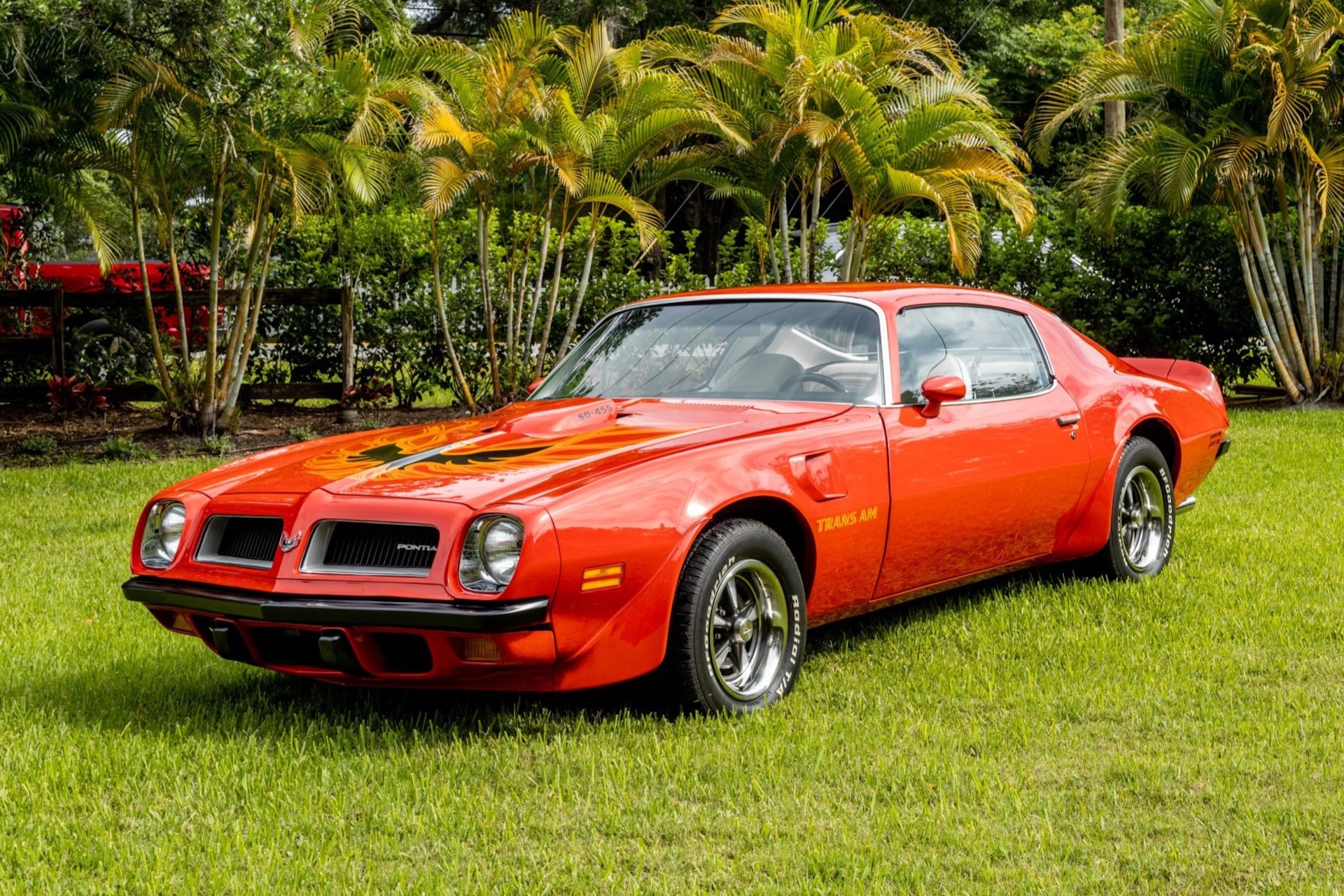 Detroit muscle’s golden age peaked in 1970 with cars like Hemi-engined Dodge Charger R/T and LS6-code Chevrolet Chevelle SS 454. From that point, a combination of reduced compression ratios, higher insurance costs, spiraling gas prices and the weight of additional safety equipment saw power and performance tail away until by the end of the decade there was almost nothing left.

As soon as 1974 the enthusiast landscape was unrecognizable from four years earlier. The Hemi was dead, big-block engine options were increasingly rare, Chevy was about to axe the Camaro Z/28 as it already had done with the SS396, and Ford had downsized the Mustang so comprehensively that you couldn’t even buy one with a V8 in North America. Yep, the top engine in a Mustang in 1974 was a 2.8-liter V6 that put out an embarrassing 105 hp (107 PS).

Which made your Pontiac dealer about the one in town that talked your language. The most obvious change to the 1973 Trans Am had been the optional new Firebird hood graphic, which replaced the front-to-rear stripe seen on the 1970-1972 cars, and the addition of some bright new colors, including neck-snapping Buccaneer Red. But the most important change was under that hood. While every other manufacturer was scaling back its performance efforts, Pontiac’s engineers actually increased theirs, introducing the new 455 Super Duty engine option.

The Super Duty had special heads, a stronger block, and forged rods and pistons, and despite running a low 8.4:1 compression ratio enabling it to operate on the period’s low-lead fuel, it pumped out 310 hp (314) and 390 lb-ft (529 Nm) of torque measured by the more realistic net-horsepower system introduced in 1972. Car & Driver jumped into a three-speed automatic Super Duty (a four-speed manual was also available) and ripped to 60 mph (96 km/h) in 5.4 seconds, which was crazy fast for the era.

Seventy-four Firebirds gained new shovel-nose styling, but the rest of the package was mostly the same. Only 943 of over 10,000 Trans Am buyers splashed for the SD 455 option that year, after which it disappeared from the range. You could still get a 455 in a Trans Am, but now fitted with a catalytic converter and a puny single exhaust system, it was identical to the engine you could get in a Pontiac station wagon and only made 200 hp (203 PS). It would more than 20 years before a Firebird was officially rated at more than 300 hp (304 PS).

The car pictured here, which is currently located in Florida and for sale on Bring-a-Trailer, underwent a full restoration a few years back, including an engine rebuild that involved adding a performance camshaft that should push it over the 300-hp mark.