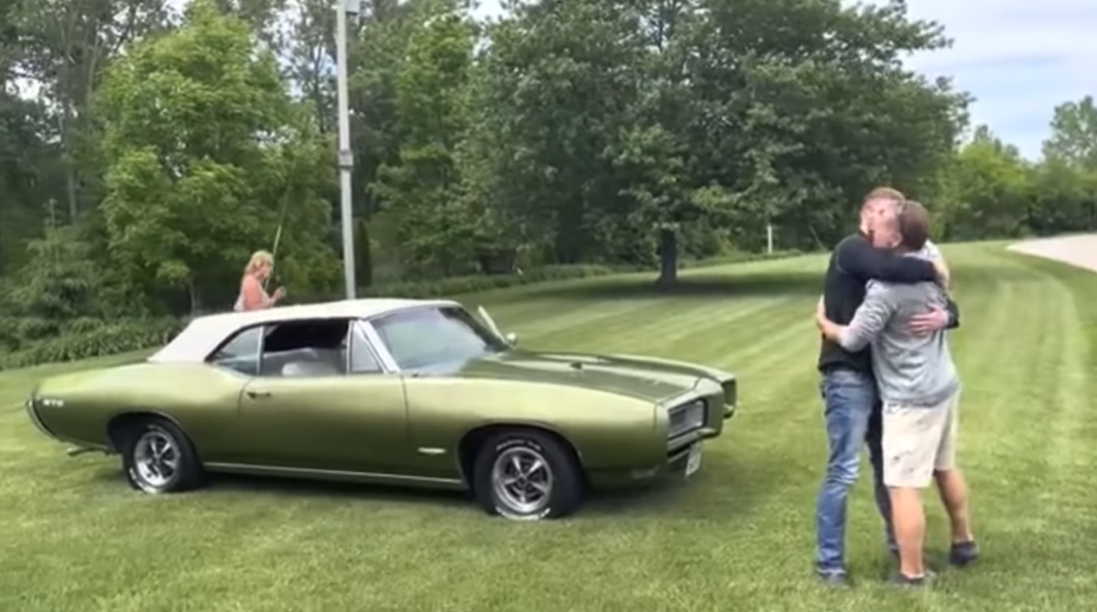 In 1992 my father bought a 1968 Pontiac GTO from a local man named Steve Cordes, who told him that he didn’t believe it was a numbers matching car. My father (Alan Vandyke) began to tear the car down to the frame in order to properly restore it. When he dropped the gas tank, he found the original Pontiac build sheet. After de-coding the sheet, he was able to determine that the car was numbers matching from front to back, and even into the carburetors.

Over the next 2 years and change, he built the car back up from the frame, replacing everything that needed to be replaced. He rebuilt the engine, and cleaned everything up, and put it all back together. In the summer of 1994, the car restoration was finally completed!

In the fall of 1999, after having kid number 5, my father decided to sell the car in order to finish the basement. The day that he sold this car is the very first memory that I retained as a child. I remember the very last ride that we took in the car, on the day that it was sold. I was 3 going on 4 years old. Growing up, every time that my father and I went to a car show, I was always told to keep an eye out for the GTO. It never showed up.

In the spring-summer of 2019, 20 years after it had been sold, I decided to start looking for the car. I dug up a few pictures of the car showing the old license plates, and sent them to a few cop friends to see if anything would turn up.

Months later, my mother was able to dig up the receipt for the paint job from my fathers restoration of the vehicle, giving us the VIN number of the car. A long summer of unsuccessful searching followed, and in early spring of 2020, I decided to pay a Private Investigator to look for the car. After months of COVID, and not hearing much, the P.I. informed me that he was not able to turn up any information on the car. A few months later I had applied and joined a few Pontiac and GTO pages on Facebook, where I posted my story in hopes of somebody recognizing the car. Months went by, and still no answers.

I finally posted to a few more Facebook pages, and after a day or two, I was told to Google the VIN. We are not sure what changed, but this time when I googled the VIN, a single search result came up: the registration for a car in the country of Denmark, matching the VIN and description. Since 2008, the car had been registered in the country of Denmark. After some searching, I was able to find One Facebook page that was titled in English “GTO club Denmark”. The page had 82 members. I shared the story again, hoping that somebody would recognize the car.

The next morning I woke up to a picture and a video of the car in my inbox from a man named martin that said he knew the owner. He got me in touch with the owner, and translated for us since the owner did not speak English. The owner was excited to hear the story, but not willing to part with the car. My last communication with the owner was the fall of 2020.

In January of 2021, Martin reached out to me and informed me that the owner of the car was in a tragic accident with his land cruiser in which he lost his life. Four months later, the owner’s daughter and widow reached out to me, willing to sell the car. My uncle (my father’s best friend) and also my fathers cousin pitched in to foot the bill to get the car back without my father knowing. I had it shipped in a container, and then trucked to a friend’s house, where we went through the car, before surprising my father on Memorial day of 2021.

Watch the video below.