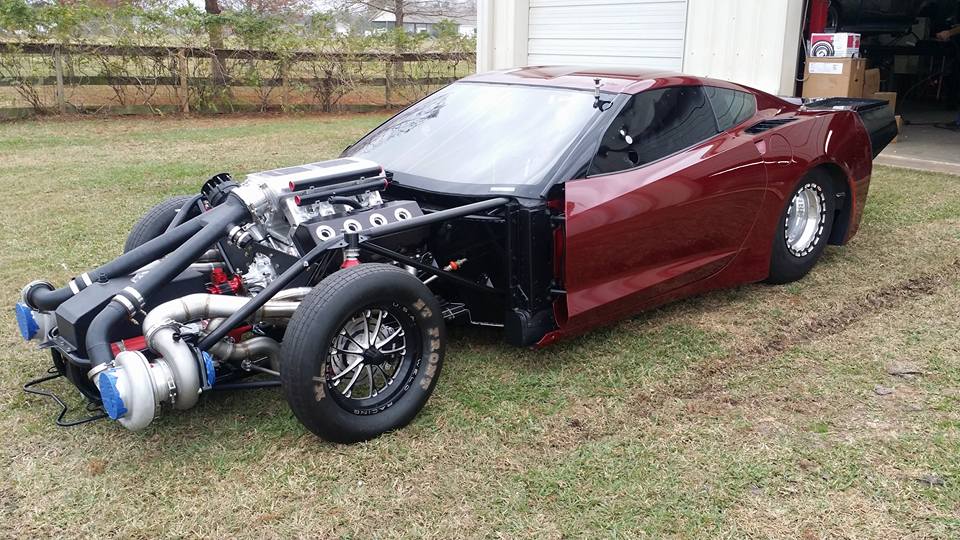 So, what’s going on under this Stingray Corvette’s custom hood?

Well, for starters, it’s powered by Outlaw 548 Proline Racing HEMI V8 engine which is a beast on its own. However, 548 receives extra help from couple of Precision 102mm turbochargers which, together raise the power output to incredible 4,000 horses. Like 3,500 hp from the beginning of March wasn’t enough already!

Although entire under-the-hood department had been replaced, much of the car has been kept intact. Most of the rear end, floor panels, deck lid and roofline are factory parts. In fact, the top can still be removed, but instead of Corvette’s cockpit cabin, it now reveals a pro racing roll cage. Doors, however, are custom made.

Not only that, but they’re made out of carbon fiber as well. Oh, and have I mentioned the tires yet? This Corvette is featuring small tires which might look somewhat odd at first, but award the car with “the quickest and fastest small tire car on the planet” moniker. It’s really no wonder why Alepa’s custom C7 ‘Vette has been gaining so much attention in recent weeks. It’s state of the art car in both styling and performance categories, and it really stands out amongst its competitors.

As for its performance, the car hit 4.05 on 1/8 mile RTRA drag in its very first outing (while still having 3,500 hp). Since that, Alepa and Valden’s Corvette has had a fair share of under 4-second runs, including the fastest run in history of its class, at Northstar Dragway in Denton, Texas.

The record time is 3.859 at slightly north of 212 miles per hour. We’d say that this HEMI-powered 4,000 hp Corvette has plenty more to show us, and we’re keen on being graced with another set of such performances in the near future.

In the meantime, take a look at record-breaking drag, as well as at some of its previous blitzes in videos below.