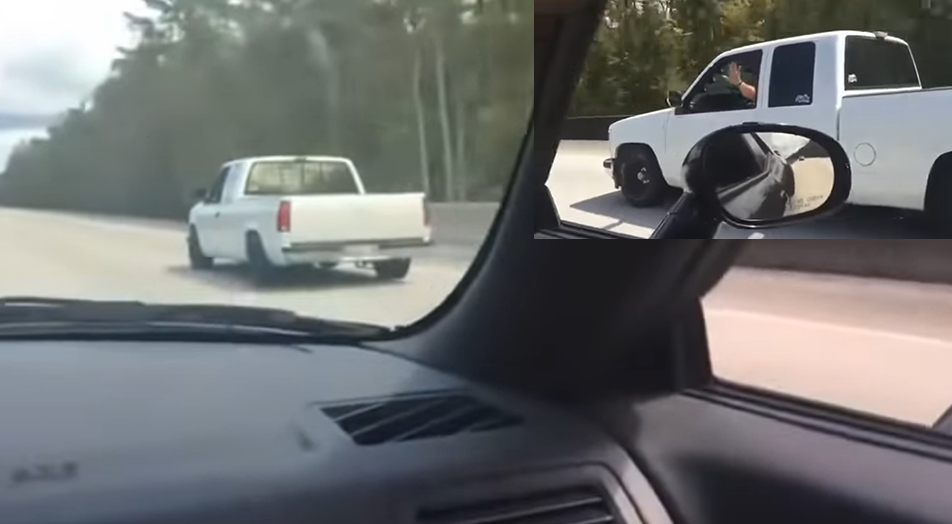 Passing the time on a sunny afternoon with a little impromptu highway pull to pass the time is a pretty good choice.

This camera car is a Dodge 392 CID Challenger, a pretty potent combo coming straight from the factory. On the other lane, a sleeper Silverado that’s been LS swapped and boosted, which even in its most basic form should be good for around 500 horsepower.

The first run is a great race  side-by-side  with the rides staying locked together until aerodynamics take over and the somewhat swoopier Challenger pulls ahead to take the win. In the second run goes the truck’s way, with the portly hauler jumping out to a big lead and continuing to walk away to win by a few truck lengths.

When we speak about little gestures we have to take a moment to talk about gestures and taunting during a race. When the guy in the Silverado was obviously paying attention to the road and not risking anything by tossing the wave at the Challenger driver, but we’ve seen some taunts that are legitimately dangerous, like “rowing”, where the driver makes the motion of rowing a boat with both hands out the window.

We gotta ask if it’s worth taking both hands off the wheel in the middle of a race to taunt the other guy?

Check out the video and share your thoughts with us.