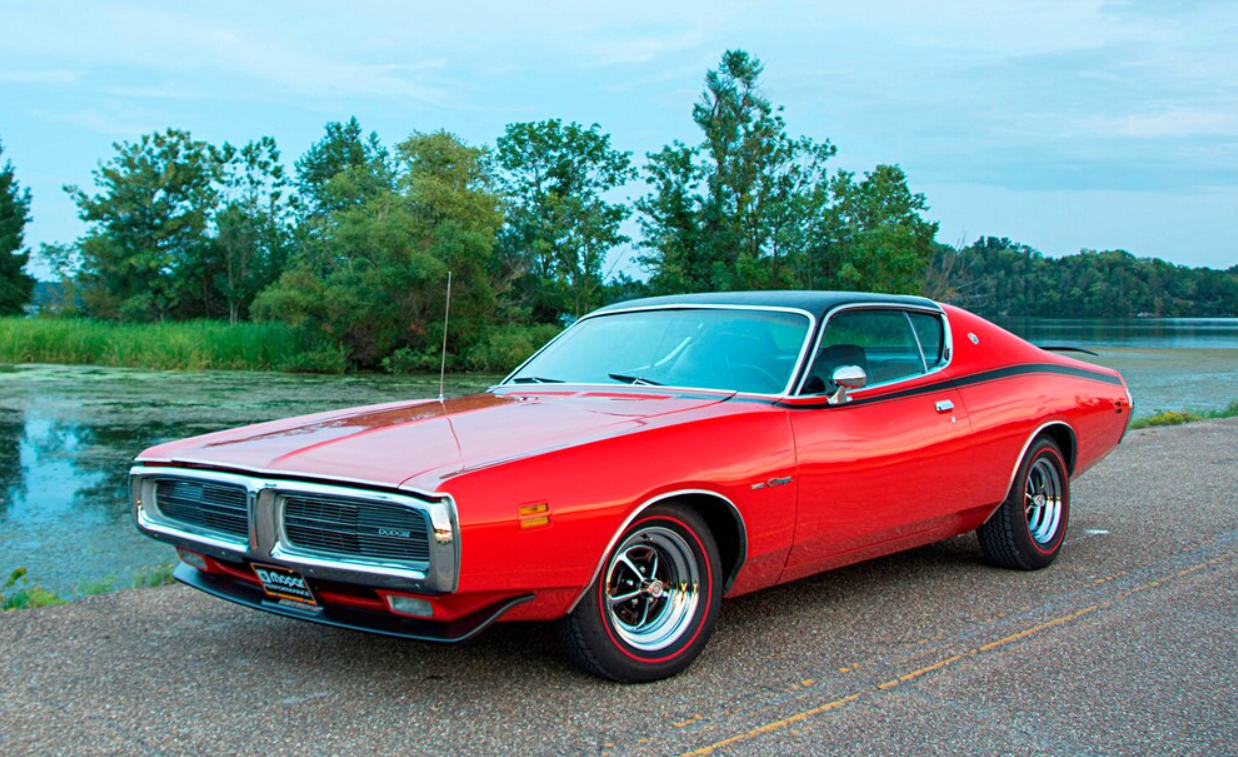 The easiest way to recall past memories is to slide behind the wheel of an old car, the era of muscle cars created an abundance of memories for millions of car guys, and it’s encouraging when a cool car survives decades of abuse or neglect.

In this story a 1971 Dodge Charger SE was brought out of storage to be enjoyed on the back roads of Tennessee, and  has the right look, the feel,  even the right smell.

The owner of this well preserved Charger is Wade Kawasaki, and if his name sounds familiar, then you may know him as the President of the Coker Group, the parent company for Coker Tire, Honest Charley, and other automotive aftermarket manufacturers. Kawasaki is also the Chair-Elect for the SEMA Board of Directors, which makes him one of the highest positions that a car guy in the automotive aftermarket can hold.

He is a  busy man, has plenty of frequent flyer miles, but still finds time to enjoy old Mopars. Even Though he doesn’t classify himself as a diehard Mopar guy, a vehicle like this 1971 Charger can change a car man’s heart in a hurry.

Kawasaki casually has been seeking out a Challenger or Charger from this era for his wife Rose, who had an itch for a Mopar muscle car.

Some years ago, he had a friend that moved overseas, but had left the car behind in a friend’s barn in the Atlanta area. The previous owner knew that he wouldn’t  use the car, so he sold it to Kawasaki knowing that it would be going to a good home. Although the car had some visible signs of wear due to the years of neglect, it was good in shape. Kawasaki saw the potential in it and jumped at the opportunity to buy the Charger and bring it back to Chattanooga, Tennessee. Few weeks of work between other projects at Coker Tire and Honest Charley brought the Charger out of its slumber,  now it’s finally ready for a life on the road once again.

After a few pumps of the throttle and a turn of the switch, the vehicle comes to life, but don’t expect it to wake the neighbors. The original 383ci engine has stock internals and stock exhaust, so it is so quiet to even  hear yourself think, while also hearing the low-gear whine of the 727 TorqueFlite automatic transmission. The numbers-matching engine has only a few updates, including an MSD Pro Billet distributor and ignition system to replace the ailing stock ignition components. The shop guys also replaced a few pieces of the fuel system and had to repair a leaking radiator and a sticky thermostat. All things considered, the car needed very little to be road-worthy.

The compression ratios started falling drastically in 1971, but the 383ci Magnum engine cranked out 300 horsepower (gross rating) at 4,800 rpm and 409 lb-ft. of torque at 3,400 rpm. This isn’t a power house, but certainly offers the last glimpse of hope for the muscle car era, as 1972 would see even more significant horsepower decreases. The 383 engine in fact was eliminated from the option list, and replaced with a similar 400ci option. The mild-mannered combination in Kawasaki’s Charger runs well on regular unleaded gas, but tends to be a little thirsty due to the 3,700-pound curb weight and a heavy right foot.

Driving impressions from such a solid survivor are the same as the new-car tests from the early ’70s. Typical of Chrysler products from the ’70s, the power steering offers a very light wheel, which is perfect for cruising down the highway, but not ideal for spirited driving when the tail finally decides to come around. The car is definitely nose heavy, and offers little in the way of hard cornering capabilities. Kawasaki used his resources at Coker Tire to round up some alternative tires and wheels for the Charger in an effort to give the car a bit more grip, while also giving it a great muscle car look. The car would’ve originally come with F78-14 tires, mounted to 14×5.5-inch wheels, but when Kawasaki got the car, it had a set of 15-inch Mopar Standard steel wheels with dog dish caps and cheap, generic radial tires. The new combination consists of Coker’s BFGoodrich Silvertown redline radials, sized at 215/70R15 and 235/70R15, and mounted to a set of 15×7- and 15×8-inch Magnum 500 wheels. While the Magnum 500 wheels and redlines are not “correct” for the car, they woke up the sleepy Charger in the looks department.

Even though it spent years in storage, the car’s rubber components, vinyl top, and interior are all in very good condition, a sure sign of indoor storage. The paint had seen better days for sure, but Steve Anderson polished on the old materials until the vehicle had a nice, consistent finish. The car isn’t show-quality by today’s standards, but the paint offers the right amount of wear and tear to prove its originality. The trim has typical dings here and there, but the vehicle is surprisingly well kept, even with 88,000 miles on the clock and more than 45 years under its belt.

The car’s interior has flaws, but once again, it’s well-preserved considering its age. The carpet is fading, and the dash pad is cracked, but that sure doesn’t take away any of the fun factor of sliding behind the wheel of this Mopar. The Tuff steering wheel has a couple of splits, but a closer look at the interior will reveal that the original heater and air conditioning controls, as well as the AM/FM radio, are in good working order.

Kawasaki has enjoyed driving the car since he brought it out of storage, and his wife, Rose wheeled it last September during the Coker Tire Challenge, a vintage car rally in Tennessee.

After spending a weekend in the vehicle, she realized just how much real estate this Charger takes up when it’s on skinny back roads. Even Though it received updates to bring it up to modern safety standards, the car is still like a time capsule from the early 1970s, with the right mix of originality and iconic muscle car looks that gets attention everywhere it goes.

The leather SE interior is super comfortable even though it is showing some wear and has all the right textures, finishes, and smells to bring back memories of the 1970s. The carpet is fading and there are a few other flaws, but it’s certainly better than most unrestored cars with 88,000 miles on the clock.

Since Kawasaki is the President of Coker Group, it made perfect sense for his Charger to roll on a set of Coker Tire’s reproduction redline radials. The tires are BFGoodrich Silvertown radials, sized at 215/70R15 and 235/70R15, mounted to a set of Coker’s American-made Magnum 500 wheels.