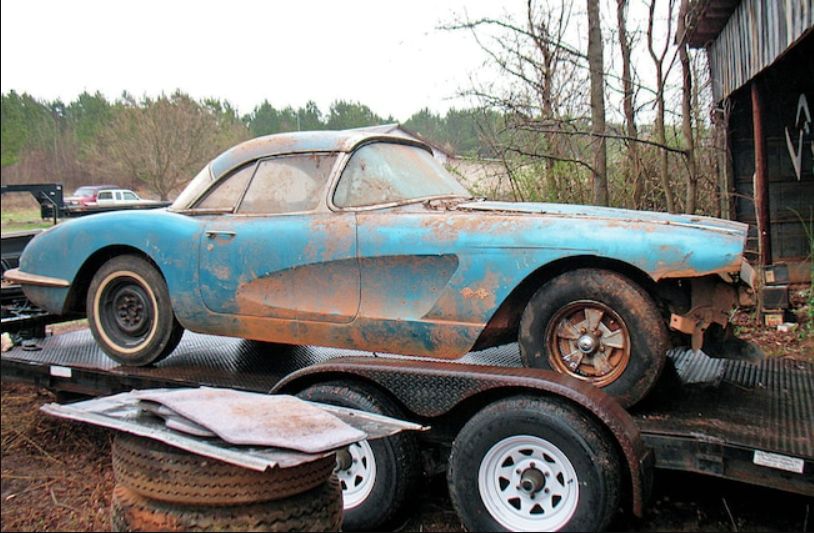 After winning the ’59 fuel-injected Corvette walled up inside a barn for 44 years after just hearing stories about it from his father Prince Michael hardly managed his happiness and excitement.

Just like the prince himself said:  “I had to chainsaw trees that were 16 inches in diameter.” When he was inside the barn, he had to tear down wooden walls that were placed there by the owner in order to keep the ’59 treasure safe.

Story gets weird after you get to know that Prince actually knew the owner because of working with him for many years at his uncle’s. “There was a period of time of about three years, from 2004 to 2007, when I saw him almost every work day.”

They both had worked for Prince’s uncle, a lot of time he had asked if he could show it to him or if he wanted to sell it to anyone.

The owner of the car, Carrol Johnson would never say no he would just walk away. While growing up Michael heard stories from his father about the Snowcrest White, fuel-injected/four-speed Vette. Right after buying the Vette, his father “promptly removed the hubcaps and chromed the wheels and added chrome center caps to complement the wide whites.”

“He told me about running the car on Mulholland Dr. I’ve got pictures of the car with drag racing trophies sitting on the hood and the decklid.” The ’59 was a winner at the dragstrip, but wasn’t as dominant when the ’60 Corvette fuelies came out. So, Michael said his father explained how he and his brother simply went to the Chevy dealer and purchased the improved ’60 model fuel-injection unit. He was competitive again and back on top all of the sudden.

The ’59 was a piece of family history from a long time ago and far away that intrigued Michael, who himself was born in 1967. His father had “a barrage of cars: a ’57 Chevy, a ’58 Chevy, a ’65 GTO. Dad was from a little town called Campobello, which is just north of Spartanburg, S.C. He moved back there, from California, in the early 1960s and took the Vette with him.”

The ’59 Vette soon became well known around the area. Harold kept the vehicle pretty much stock. In 1963, Pontiac introduced the Grand Prix and Harold “had to have one.” So he traded in his ’59 Vette. Carroll Johnson, one of Harold’s childhood friends, hustled down to the dealership to purchase the ’59 Vette. Johnson replaced the fuel-injection unit with a four-barrel carburetor and painted the Vette blue. He then traded the chromed wheels for a set of aluminum mags.

Johnson drove the car for a couple of years and one day he even took it to Atlanta where the car suffered from front-end damage. After coming back there were many potential buyers trying to buy the Vette. So Johnson moved the car to his parent’s farm and he eventually buried the car in order to keep the potential buyers away.

Michael Prince told us, “Everybody knew this fellow had bought it from the dealership after my dad had traded it in, and boarded it up inside a barn. It was not unknown, but it was certainly unseen.” When his parents passed away Carroll Johnson and his brother moved into the old home place on the farm. His brother died earlier and Carroll died in 2013, leaving 21 cars and all his possessions, including the Vette. He had no family and no will so his cousin liquidated the estate.

The cars and estate attracted a lot of attention. Michael Prince wanted the Vette so he teamed up with his brother David and his uncle to bid on a lot of 12 vehicles including the ’59 Vette. Corvette enthusiasts in the area didn’t know the ’59 was a fuelie. Bidders could “take a peek” at the old Vette through a door in the barn, but they weren’t able to actually get into the space to touch the car and really check it out.

Michael’s father died three years earlier. He wanted to get the car back and he asked Carol to get it back for him. Michael would never talk about the car to his dad. It was with high anticipation that Harold’s son, Michael, cut down the trees to clear a path and then tore down the walls to reveal the Vette he’d dreamed of all his life.

Michael had it hard to believe that his dad had bought the car for him after so many years.

“Neighbors and people who had heard about the car for all their lives came out to see. I think that they were almost as excited as I was to see that the car actually did exist.” Michael was surprised by how much the Vette had degraded, from “the years sitting in a dirt floor barn as the home to squirrels, coons, and field mice.” I wondered about the fuel-injection unit.  And Yes, Michael found the fuel-injection unit in an adjacent room in the same barn, where he also found the tach-drive distributor.

Michael and Jerry, his uncle, hunted through multiple barns on the 60 acres for the 283, which proves that the original engine was not the vehicle.

He couldn’t find the engine until his uncle talked with his old fellow named Cooter who was a close friend of Carroll. Cooter led them to the matching-numbers engine in another barn on the property. The ’59 has both tops, a Wonderbar radio, and came from the factory in St. Louis with the 290-horse fuel-injected 283. “I’m pretty sure it has Positraction, too,” said Michael.

Now he is planning on a complete restoration, except he just got the vehicle so we got one more mystery.

Next thing that he has in plan is to get the trunk open, and the components which are parts that are supposed to fix the front end are supposedly inside the trunk.