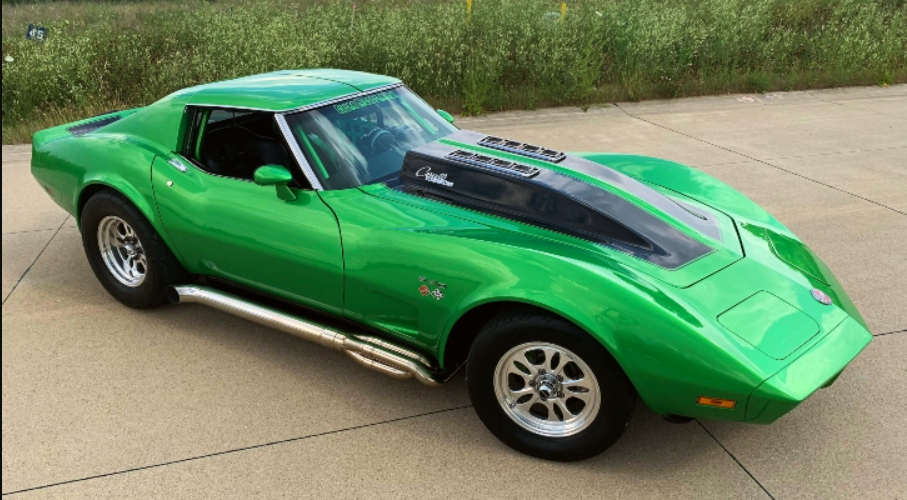 This 1974 Chevrolet Corvette is a high end hot rod which was built with no expense spared and has been in the Top 10 Custom Builds since the Corvette Reunion started.

The late Robert Proffer owned the car since 1980, the C3 Stingray Corvette was bone stock when Jamie acquired it after his Father passed away in 2009.

On the other hand Jamie has always been into hotrods so after he decided to build the Vette as tribute to his Dad, he wanted to make everything custom most of it to be done by hand.

He knew exactly how the 1974 Corvette would look and that if you choose to do it, you have to do it right the first time. He spared no expenses and top notch builders from the area helped him, the Corvette turned just like Jamie imagined. This was his way to deal with his Father’s death and he named the car “Anger Management”.

“I only sold the Corvette because I knew you, and I knew it was going to the right place. I hated to see the car go, but I really didn’t want to work on it anymore. Bryan, good luck with the Vette and enjoy my labor of love for over 10 years. Lots of thoughts and memories are in that car.”

Bryan is so happy and excited to own this beautifully built C3 Stingray Corvette.

He will preserve the name of the car as it is part of its history and the fact that “Anger Management” will be an official Rat Fink drawing makes him happier. Now we will talk about the building.

Started as a bone stock 1974 Corvette, the vehicle now has a 1980 tail panel and one-off custom wheels wrapped in Mickey Thompson drag radials at the back and front runners on the front. The driveshaft is from DynoTech Engineering, the rear is Ford 9-inch with 33 spline Moser axles 4 link and diagonal with double adjustable AFCO shocks on the rear.

The exhaust system starts with a set of Stainless Works headers that go into stainless 5-inch side pipes. The drop-off parachute soon will be replaced with a Stroud launcher chute. The wheelie bars and cage are provided by EC1 Race Cars from Davison, MI. Ensuring the 1974 Corvette will stop as quick as it accelerates are line lock front brakes, hydro boost system and aerospace calipers powder coated to match the car with slotted and drilled rotors.

“Anger Management” is equipped with a Be Cool dual aluminum radiator with dual fans to fight  the heat.

It has an electric water pump, MSD distributor and wires with a MSD 6AL box. The single chrome wire alternator with air conditioning currently is not hooked up. Rick’s all stainless fuel system and Aeromotive fuel regulator.  And for the end the Stingray Corvette has untouched 200 Big Shot Nitrous plate system, which is going to be used soon at the track.