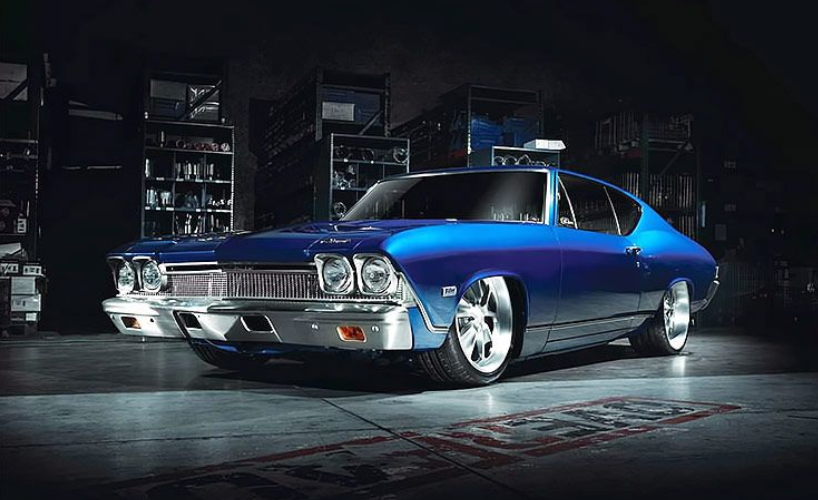 The story started all with an innocent note when Steve’s friend Doug was out cruising his own classic car.

A guy in the next lane motioned to him while they were at a stoplight and then told Doug that his brother is selling an old car and  that he should check it out.

He followed the guy to look at the car since he knew Steve was in the market for a Chevelle.

The vehicle wasn’t in the best shape considering it was sitting in a yard for years, but Steve saw potential there and offered to pay a paltry $100 for it as long as Steve and Doug would dig the car out of the backyard themselves – it had been in the yard for a really long time.

The plan of Steve was to mildly restore the Chevelle to its original state, just enough to turn the heap into a cruiser.

The car didn’t have its original engine inside so matching numbers was out of the question.

He wanted to blend influences from luxury cars, street rods and laid-out customs into one clean package packed to the roof with custom details.

Modern upgrades were necessary for the suspension so up front, a set of tubular control arms from Heidt’s was installed along with a set of Slam Specialties RE7 airbags and Bilstein shocks.

For the air suspension management, a full set of GC air valves controlled by an AVS switch box was installed, with air supplied by custom air tanks and Viair compressors. The wheels are Budnik Revolvers that are 20″ in the front and 22″ in the rear, wrapped in meaty Falken Azenis tires.

The exterior of the vehicle shows a lot of class and an attitude hint , but if you pop the hood  you’ll reveal a true beast. A Turn Key Engine Kenne Bell supercharged LS2 was dropped in to provide a massive amount of power and modern reliability. All told, the package puts out more than 740 hp.

The interior reflects street rod styling and unadulterated luxury due to a modern pro-touring suspension, and a pure performance muscle engine.

A custom formed dashboard was outfitted with Classic Instruments gauges. The dash flows into custom door panels and a floating center console that houses a Mooneyes push button shifter. Everything was wrapped in a total of 13 hides of tan Bentley leather. An ididit steering column with a matching Budnik Revolver steering wheel finishes off the dash.

We have some nice touches in the car like Vintage Air, a Ron Davis radiator, and of course, a Magnaflow exhaust.